At first glance, the pool’s design is pretty awe-inspiring. Both the pool’s walls and floor are completely transparent, meaning swimmers can get a full view of the hotel below and the London skyline. The pool is made out of cast acrylic — which transmits light at a similar wavelength to water — ensuring that the pool is completely clear, the pool’s designers explain on their website. A built-in anemometer will monitor windspeeds and a digitally-controlled building management system will make sure the water is always at the right temperature. 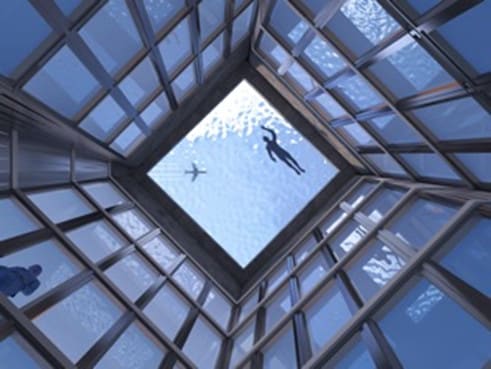 Entering or exiting the pool will be something straight out of a sci-fi movie. Turns out figuring a way for swimmers to actually get inside the pool without obscuring the view was tricky. “Normally a simple ladder would suffice, but we didn’t want stairs on the outside of the building or in the pool as it would spoil the view — and obviously you don’t want 600,000 litres of water draining through the building either, said Compass Pool’s technical director and pool designer Alex Kemsley. The compromise was a rotating spiral staircase based on a submarine will rise from the pool floor when a swimmer wants to get in or get out.

Another notable trait of the rooftop pool is that it’s being built in London, where it rains 106 days a year on average. It’s unclear whether Infinity London has any plans on what to do inclement weather strikes (as it will, often). Swimmers at Infinity London will no doubt suffer the same fate as these tourists at Marina Bay Sands in Singapore, currently the world’s largest infinity pool, and be forced to swim in the rain.