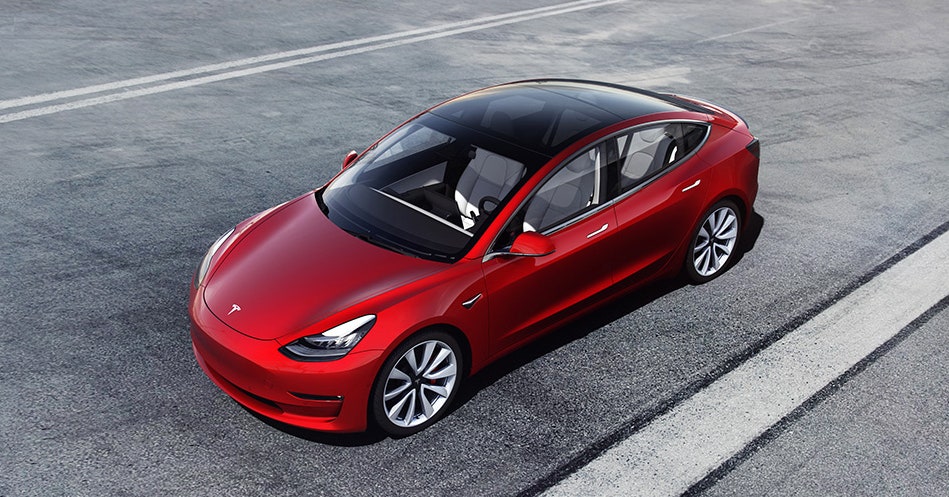 The National Highway Traffic Safety Administration, the arm of the Department of Transportation charged with reducing the number of Americans killed on the road, yesterday released the results of the crash test for the Tesla Model 3: five stars in every category.

The perfect score is a welcome ray of sunshine during a (tweet)stormy stretch for Tesla—just yesterday, Bloomberg reported the automaker’s supply chain manager has left the company. But it’s hardly surprising. Without an engine to work around, Tesla’s engineers can essentially make the whole front of the car a crumple zone, and having the heavy battery just inches off the ground limits the risk of rollovers. Tesla’s cars have always shown themselves to be super safe. A few years ago, the Model S proved so strong, the testing equipment broke before it did. The Model X SUV put up a perfect score in its latest exam.

In NHTSA’s frontal crash test, the car is hurled into a fixed barrier at 35 mph, simulating a head-on collision with another car. The test uses a dummy representing an adult male in the driver’s seat, and a “small-size adult female riding shotgun, which are evaluated for damage to the head, neck, chest, and femur.

NHTSA’s testing measures how its dummies fare in four kinds of kabooms: a head on crash, getting T-boned by another car, sliding into a telephone pole, and rolling over at highway speeds. Interested consumers can also scope safety scores produced by the Insurance Institute for Highway Safety, or IIHS. The independent non-profit has not yet released crash ratings for the Model 3, but the 2017 Model S earned top marks in most categories. It missed out on being a “top safety pick though,” after it scored an “acceptable” on the tricky small overlap front test and its headlights were rated “poor” for providing inadequate visibility, especially on curves.

Those tests are about how the car handles crashing, but new technology is making it easier than ever to avoid the crunch in the first place. That’s why NHTSA and IIHS also consider the value and performance of “active safety” features, chief among them automatic emergency braking, in which the car can sense an imminent collision, and hit the brakes on its own. Here too, Tesla performed well.

The side pole crash test pits the car against a 10-inch diameter pole, which it hits at 20 mph. The dummy (in this case, a “small-size adult female” wearing a seat belt, is checked for damage to the the head, chest, lower spine, abdomen, and pelvis.

On IIHS’s front crash prevention test, the Model 3 and Model S each scored six points of out six—good for a “Superior” rating—after successfully avoiding collisions at both 12 and 25 mph. (IIHS runs these tests separately from its more destructive crash testing, which requires five cars for any given model.) And last month, the Highway Loss Data Institute, a sister organization of the IIHS, found that Model S sedans with crash avoidance features reported fewer claims under property damage liability coverage (by 11 percent) and bodily injury liability coverage (by 21 percent) compared to older cars without the tech. And while other automakers are steadily adding these features to their cars, Tesla puts them in every vehicle it builds, standard.

The question mark on Tesla’s safety resume concerns its Autopilot feature, which keeps the car in its lane and away from other vehicles in simple settings like highway driving. Critics argue it lulls drivers into thinking the system’s more capable than it is—which seems to explain why at least three drivers have smashed into stopped fire trucks at highway speeds in 2018 alone. (None suffered serious injuries, adding some credence to those crash tests.)

The side barrier crash wallops the vehicle with a 3,015-pound barrier at 38.5 mph. The results are combined with those of the side pole test to yield an “overall side star rating.”

Musk insists the feature is a life-saving one, but his go-to argument relies on a dubious statistic that fails to separate the role of automatic emergency braking in preventing crashes from that of the sorta-self-driving system. (The number comes from Tesla data that shows a 40 percent drop in airbag deployments between model year 2014 and 2016 cars, after the automaker made Autopilot available with an over-the-air software update.) And when the National Transportation Safety Board started investigating an Autopilot crash that killed a California man in March, Musk got into a public dispute with the agency, arguing that critiques of the system are dangerous, for they could convince drivers to stop using a valuable safety feature. In May, Tesla said it would start releasing quarterly Autopilot safety reports. It hasn’t yet, and Tesla did not reply to a question regarding whether it would do so. But experts say the data’s just not there yet to properly assess how the feature affects safety.

Tesla’s problems, though, have never come from its actual cars. Apart from the occasional quality control issue, the automaker has enjoyed consistently terrific reviews from journalists and customers. We think the Model 3 is a tech-loaded blast to drive, too. Same for the Model S, same for the Model X. But that’s not enough to succeed in this brutal business, in which profit margins sit in the single digits, supply chains wrap around the world, and minor bottlenecks can prove asphyxiating. But if Tesla can get past its problems—the flight of executives, the tweet-induced lawsuits, the reported federal investigations, and the questions about production capability—it’s got the goods to be a smashing success.