Gawker is relaunching in early 2019 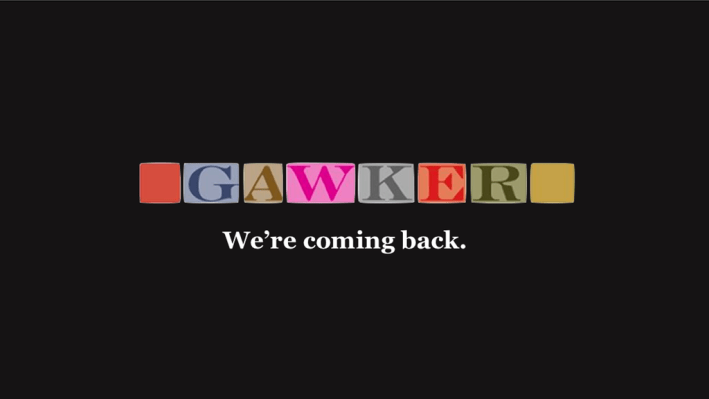 After a two-year hiatus, Gawker is coming back. Peter Thiel, be damned.

Bustle-owner Bryan Goldberg, who paid $1.35 million for rights to the defunct gossip site in a bankruptcy auction in July, wrote in a memo to Bustle staff Tuesday that Gawker would relaunch next year with Amanda Hale, the former chief revenue officer of The Outline, as its publisher.

A spokesperson for Bustle confirmed the hiring and upcoming launch to TechCrunch, adding that Hale “will be responsible for building out the sales and marketing teams, and developing the overall strategy for the brand. Her first project will be to solidify a plan to ensure the Gawker archives have a safe and permanent home. We will be investing significant resources in this relaunch, and we will continue to make further announcements as plans progress.”

According to the memo, the new Gawker will take advantage of Bustle’s resources, technology and business platform.

“We won’t recreate Gawker exactly as it was, but we will build upon Gawker’s legacy and triumphs — and learn from its missteps,” Goldberg wrote. “In so doing, we aim to create something new, vibrant, highly relevant, and worth visiting daily … completely distinct from our other properties and sit within a separate corporate subsidiary,”

Goldberg, a man, is the founder of Bustle, a site that creates content for millennial women. He’s raised some $80 million in venture capital for the site, which appears to have found its footing after a rough start. In 2014, one year after Bustle’s launch, Goldberg penned a painfully tone-deaf blog post announcing a $6.5 million round:

“Isn’t it time for a women’s publication that puts world news and politics alongside beauty tips?” he wrote. “What about a site that takes an introspective look at the celebrity world, while also having a lot of fun covering it? How about a site that offers career advice and book reviews, while also reporting on fashion trends and popular memes?”

Google Ventures pulled out of that round for ethical reasons following the blog post. Goldberg went on to ink deals with several VCs, including GGV, General Catalyst, Saban Capital Group and Social Capital.

As for Hale, she left The Outline in May amid struggles at the digital media startup. Just last week, The Outline announced it was laying off its remaining staff writers and would rely solely on freelancers. It’s likely nearing a shutdown, despite having raised $5 million in venture capital funding earlier this year.

The Outline’s reported struggles don’t hold a candle to Gawker’s tumultuous past.

Gawker parent company Gawker Media was forced to file for Chapter 11 bankruptcy protection when a Florida court ordered it to pay $140 million in damages to Hulk Hogan, who had sued Gawker for publishing his sex tape. The lawsuit, and two others against Gawker, was bankrolled by Peter Thiel. The PayPal co-founder and Silicon Valley billionaire had a long-standing vendetta against the site since it reported that he was gay before he had come out publicly.

In its heyday, Gawker attracted 23 million visits in a month, according to Wikipedia. Based in New York and founded in 2003, Gawker Media also ran Jezebel, io9, Deadspin and Kotaku — all of which were acquired by Univision for $135 million following the infamous lawsuit.