Coming off a rough 2016 filled with layoffs and recalls, GoPro’s got a lot to prove. After all, not everyone needs to own a drone or an action cam. And, with many top-tier smartphones packing impressive levels of waterproofing, a GoPro isn’t even a necessity for capturing footage in the wet outdoors. But, the new GoPro Hero 6 still retains distinct advantages over other devices. A lot of its strengths are directly related to the how compact and mountable this tiny, powerful action cam is.

Battery life sucks, even with all wireless off, so definitely buy a spare battery. HEVC compression is the future of 4K, but it might not be supported on every device you own.

GoPro has taken the same core principals behind previous Hero flagships to new extremes with the Hero6 Black ($499). This latest Hero pumps up its video and photo cred by adding a brawnier processor chip (GoPro calls this new silicon “GP1”) which unlocks 4K video shooting at 60p, or 60 full frames per second. While this spec doesn’t matter to many consumers, to professional videographers it’s another step to making silky-smooth ultra-high-resolution video capture possible anywhere. It also means that there’s extra bandwidth to do neat tricks—if you’re a slo-mo junkie, this little camera can reach 240 frames per second so your gnar kickflip can be seen in glorious, suuuuuper-slow motion.

In order to pull off these new shooting modes, GoPro’s leveraging the new-school video codec, High-Efficiency Video Coding (aka H.265). That’s great since HEVC is, as its name implies, a high-efficiency way of recording video. That means files can be smaller than those encoded with the older H.264 protocol that became the standard in the pre-4K days. But, there’s a catch—HEVC is new, and many devices can’t decode its advanced compression scheme. In my time with the GoPro Hero6, that meant some functions were incompatible with my iPhone 6s, since only iPhones since the 7 have fully-realized HEVC compatibility.

Additionally, if you don’t have a powerful PC (having at least a 6th generation Intel chip helps enormously), you’ll also have plenty of trouble getting this GoPro’s 4K footage to play back smoothly. That footage will look pretty great once you get it off the Hero6 Black, but beware the perils of 4K HEVC, especially if you’re less of a pro and more of a schmo.

The weakest suit of the GoPro Hero6 Black is capturing video in low-light conditions, but it’s better than I’ve seen from past Heros. Of course, if you’re obsessive about tweaking the picture, you should at least shoot in GoPro’s Protune mode so you can gussy up the image quality in post. But, straight off the camera, grainy noise still makes itself known in darker shots. 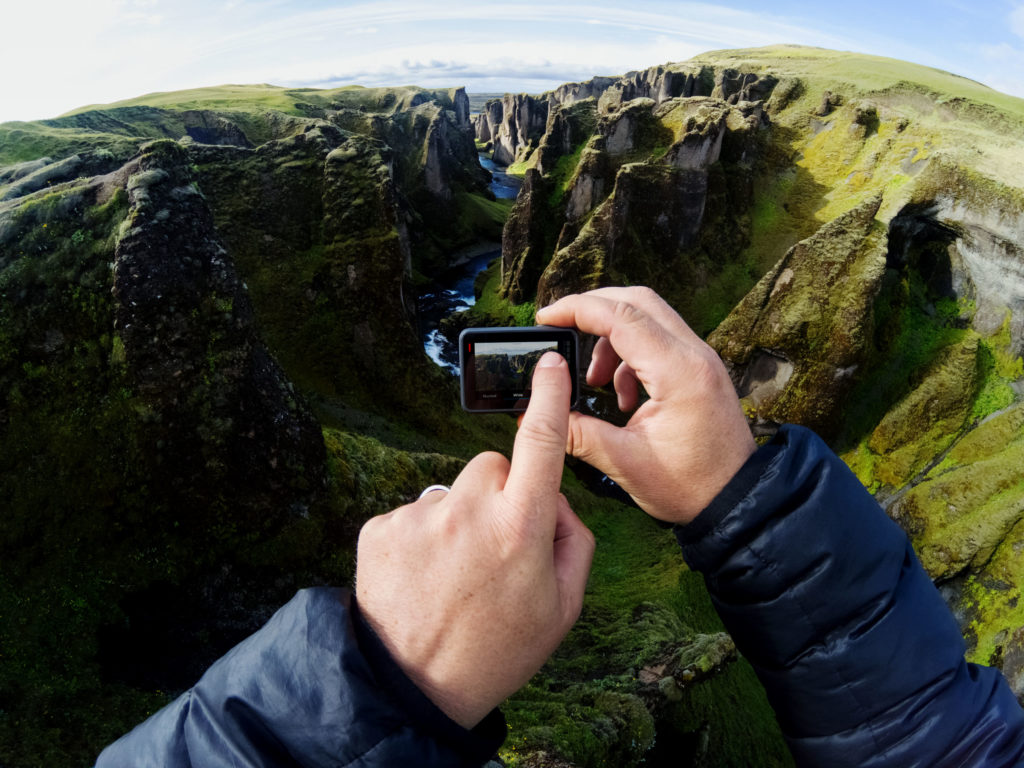 Image stabilization is another area where GoPro’s made strides, but the Hero6 doesn’t quite live up to the hype. Unlike a smartphone, which might smooth its video using optical image stabilization, the Hero6 relies on digital stabilization. It works, but I found that footage didn’t look as smooth as I had hoped when playing it back later. Shakiness will vary depending on whether you’re holding the camera naked in your hand (very shaky), or if it’s mounted to something like a helmet (less shaky). Since the Hero6 is a tiny little thing that picks up on every single little jiggle, OIS is a tough ask, so I understand the tradeoffs in play. If you’re hoping a GoPro can act as a micro-camcorder, I can say that I found traditional camcorders with OIS and flagship smartphones do a more reliable job of smoothing out shaky video. If you’re after Steadicam-smooth footage, consider using this camera with a shake mitigating Karma Grip.

Even though the GoPro Hero6 Black is roughly the same size as the Hero5, you don’t give up anything in order to get better imaging performance. It’s still waterproof to 33 meters without a case, for instance. The rear of the Hero6 is still taken up by a touchscreen, but the interface has been improved to include pinch zooming. Faster 5 GHz Wi-Fi should improve transfer speeds to your phone, especially if you plan on sending 4K files.

But all this condensed tech goodness comes at a price: battery life. I found that the GoPro Hero6 Black had shockingly short battery life. Even when not rolling video, I found just keeping the Hero6 on in my pocket led to alarmingly fast battery drain. I tried to stop the bleeding by turning off non-essential services like GPS and Wi-Fi, but it didn’t seem to help. Thankfully, replacement batteries only cost around $20 a pop.

As good as this camera is, I’m not completely sold on the price. For your first action cam, I’d recommend you try the previous flagship Hero5 Black. It’s almost as capable in ways that you’ll be able to fully exploit now, and you’ll get its awesome HD and 4K/30p capabilities for $100 less. If cutting-edge 4K is of the utmost importance to you, and your workflow is totally ready to make the most of HEVC and 60p, the Hero6 Black is an impressive package that lives up to the GoPro Hero legacy.

When you buy something using the retail links in our product reviews, we earn a small affiliate commission. Read more about how this works.

Go Back to Top. Skip To: Start of Article.