Are you in the real world yet? Forget the 3:2, 4:3 and 16:9 camera formats, and embrace the world as it is – a 360-degree landscape in which anything can happen, anywhere. That’s the selling point for a new breed of 360-degree cameras that usually put two fisheye lenses back-to-back in a variety of designs to let you capture the world in a whole new way.

However, do be careful about claims of high resolution; 4K may sound a lot for a standard video, but when those pixels are shared around a 360-degree landscape the end result won’t look as detailed as you might expect.

In the emerging genre of 360-degree cameras, anything goes

In the emerging genre of 360-degree cameras, anything goes, and the product you choose will depend as much on what kind of activities you want to capture as the quality of the camera itself. Is the 360-degree format still a novelty? Yes, probably, but standards are being raised quickly, with 4K, livestreaming and post-crop editing features now to the fore.

And don’t forget, with the UK’s Black Friday on the horizon, there’s certainly going to be some deals out there for you to take advantage of. We’ve got Black Friday pages for the US and Australia too. 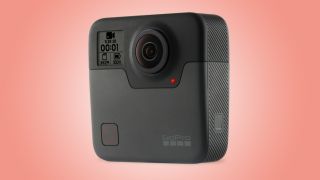 Mountable and waterproof, this 5.2K resolution 360° effort could be hard to beat

5.2K resolution
Over-capture for standard video
High-end and expensive
Overkill for most users

Did GoPro just change the 360° game? Possibly, though this highly innovative spherical camera will be too rich for most people’s blood. The Fusion can capture 360° video in 5.2K resolution video at 30fps (or 3K at 60fps). Nice, but its real trick isn’t 360 at all; an ‘over-capture’ mode films in 360°, but only to allow the creation of standard 16:9 video from the footage – so, much like post-focus on modern cameras, the Fusion allows post-framing. Why did no-one think of this before? Now add GPS, a compass, accelerometer, gyroscope, Wi-Fi, Bluetooth, 3D audio, and compatibility with existing GoPro mounts, and the waterproof (to a depth of 5m) Fusion could be a semi-pro videographer’s dream. 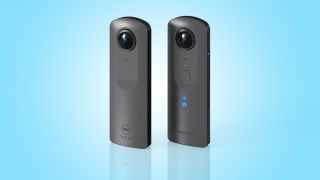 Now capturing in 4K, and with an unbeatable form factor

It was Ricoh that put 360° video creation into the mainstream with its Theta S a few years ago, but for all the brilliance of its form factor, it produced barely 25 minutes of rather soft video on one charge. The souped-up follow-up looks the same, but is capable of 4K video recording, 4K live streaming, and even records 360° spatial audio thanks to its four microphones – and for 80 minutes. Android-based and Qualcomm Snapdragon 625-powered, the Theta V vastly increases the ISO and has both Wi-Fi and Bluetooth, so can be operated remotely via an app. Thankfully, it retains the standard tripod thread its forbear had. 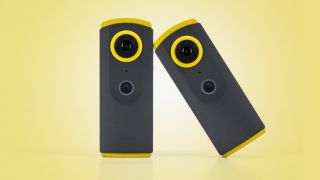 It’s short on price, but this entry-level shooter will suit experimenters

There’s something to be said for creating a product that apes a market leader yet slashes the price, but this budget effort from Detu only just manages to make the grade. Stylistically very similar to the Ricoh Theta S, the Detu Twin has less resolution, but goes beyond being simply a handheld 360 camera by  including a standard tripod thread on its undercarriage. The results are basic, and the app will only share videos of 30 seconds or less, but the biggest issue is its drastically short battery life. However, it’s easy to use, and one of the most affordable 360 cameras around, so may suit those looking to dip their toe in the genre. 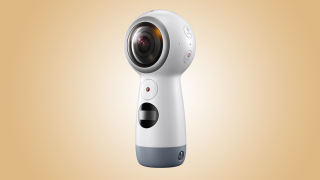 A small step forward from 2016’s effort, this cam is very easy to use

With a similar form factor to Ricoh’s Theta 360 cameras, this pocket-sized dual-lens shooter has been brought down a peg or two in terms of specs since Samsung decided it needed to help justify the existence of its own Gear VR. For example, while the original Gear 2016 captured 15MP still images, this new version achieves barely half that. It’s also got a smaller battery, which means you’re going to have to carry around a USB-C-compatible portable charger. Has Samsung gone off the whole idea of 360° cameras? Perhaps, but the cute, splash-proof Gear 360 remains very easy to use, with plenty of free editing software, so if nothing else it helps make the new medium accessible. 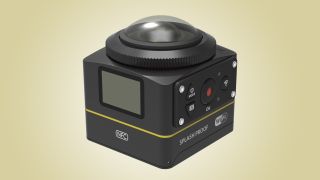 Do you actually need to shoot in 360°? Sometimes, 235° is more than enough (such as for this all-sky video of a solar eclipse ), which is why Kodak created the PixPro SP360 4K, which has only one spherical lens. Shockproof, freeze-proof, dust-proof and splash-resistant, this Wi-Fi and NFC-connected camera comes with dozens of mounting accessories, which may help to explain the high price. And while it may be solid and pocket-sized, as if one of these wasn’t pricey enough, if you want to shoot in 360° you’ll have to by this product twice (Kodak thoughtfully sells a Dual Pro two-pack). You can operate it remotely from a phone, upload to YouTube and Facebook, and make use of a lot of bundled editing software, but we’re still not convinced about the absence of true 360° capture. 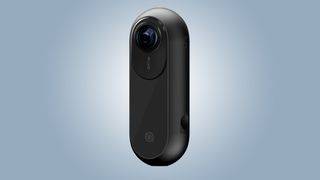 Unique video modes help this 4K clip-on to stand out

No one in their right mind thinks 360° video is going to take over from regular video. Why else would the Insta360 One include FreeCapture, a mode that allows users to film in 360° before transforming the results into a traditional 16:9 aspect ratio? It’s a little like the feature on the similarly 4K-capable GoPro Fusion, although that’s where the comparison pretty much ends. A reliable 4K 360° camera for video and stills, the Insta360 One proffers another advanced tool in the shape of Bullet Time, a fast frame-rate slow-mo mode that, rather bizarrely, requires users to wave the camera rapidly around them on… a piece of string. It’s odd, but effective – the slow-mo effect you can add this footage looks like something out of The Matrix. It comes with a tripod thread for remote shooting, too. 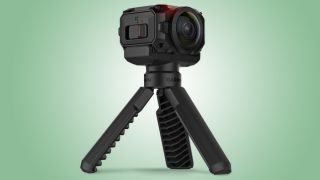 5.7K video puts this cam a cut above the rest

It might be known mostly for its sat navs and sports watches, but Garmin has produced a whopping-good 360 camera. The feature that catches the eye on the VIRB 360 is its ability to capture in maximum 5.7K resolution, and there’s a very simple reason for that awkward figure: 4K doesn’t cover a 360 landscape well. Its four microphones produce wraparound sound, too, while waterproofing, GPS, a gyroscope and an accelerometer give it a notable Garmin feel (it collects data about your adventures as you go, which you can overlay onto your 360 videos); however, you’ll have to limit those adventures to an hour or so. 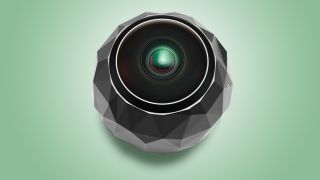 One lens, lots of love

Here’s an ambitious effort – not at popularizing the new video format of 360°, but at creating a does-it-all action cam. Dust-proof, shockproof and water-resistant, the 360fly 4K does that rare thing of capturing video in both wide-angle 360º and first-person POV modes. With just one lens, and an app with a clear layout, you can shoot, upload and share stunning and immersive 360º video just as easily as with any other action camera. It’s also got an accelerometer, compass, GPS and gyroscope for oodles of data. The drawbacks? The video is soft around the edges, and the audio is basic. 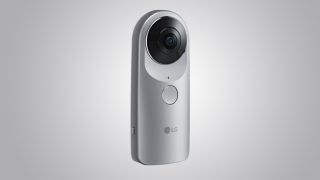 This pocket-sized 360° shooter is the lightest around

Portable and pocket-sized
Easy to use
Poor audio
Just discontinued

LG’s effort at 360° – and a definite alternative to the Samsung Gear 360 – is worth looking for if you want a simple and thoroughly affordable way to enter the world of wraparound video. Equipped with dual fisheye lenses that are flush with the body of the camera, the well-designed LG Cam 360 lets you toggle between 360° and 180° photos with a long press, and is generally a breeze to use. It comes with a handy protective case and has a standard tripod thread, enabling you to mount it on most supports. The only downside is the lack of a decent microphone, although it does pick up audio clearly enough if the source is close. It’s just been discontinued by LG, so grab it while you can. 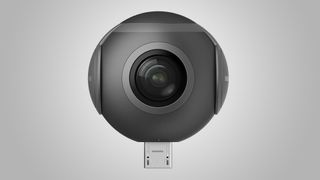 If ever you were to argue that 360 cams are really only for novelty selfies, this  would be exhibit A in the evidence bag. And although it is limited to phone-tethered, selfie-style video, the Insta360 Air is a hugely impressive, easy to use gadget that makes 360° enormously accessible. Designed for Android phones only, this golf ball-shaped camera clips on to an Android smartphone, films in quad HD, and can livestream to social media. You can’t operate it remotely – there’s no Wi-Fi, Bluetooth or tripod thread – but the Insta360 Air is extremely easy to use. You just attach it your phone’s micro USB or USB-C slot (two versions are available), turn the phone upside down, and the app automatically opens. It’s basic 360° video, made brilliantly simple.