T-Mobile is offering a major discount on the awesome Moto Z2 Force. The modular Motorola flagship normally costs about $750, but T-Mobile is slashing the price by $250 and selling the Moto Z2 Force for $500.

There’s little that’s not great about this phone. It’s packed with powerful hardware, has a sharp Quad HD OLED screen measuring in at 5.5 inches. The front glass is guaranteed shatterproof. It even has a dual 12MP camera setup on the back. The all-metal body feels and looks good, and the phone stays super thin. 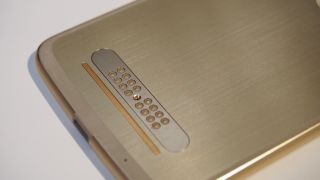 The Moto Z2 Force doesn’t just boast the same Snapdragon 835 chipset that’s found in other flagships and leave that as its claim to quality. It has those solid internals, but it shines with its ability to snap on Moto Mods that extend its functionality.

The available mods range from massive battery packs and powerful speakers to optical zoom cameras and Nintendo Switch-esque gaming controls. Motorola also has a digital projector, called the Insta-Share Projector Mod, that can effectively turn the phone into a mobile movie theater (In my experience, it’s a great way to kick back and watch a movie on the ceiling.).

Topping off T-Mobile’s discount on the Moto Z2 Force is a limited-time offer that gives customers that Insta-Share Projector Mod for free.  Considering that mod has a retail price of $299, the savings offered by these two deals together is over $500.

You can find the details of the projector mod offer here.