Despite the fact that it’s arguably never been easier to get into programming, I speak from experience when I say that it’s not all that easy to convince the youngster generation to give it a try.

My 9-year-old son is utterly obsessed with Minecraft, the Nintendo Switch and famous gaming YouTube stars, but despite being so connected to technology on a daily basis he’s shown little interest in digging deeper into what makes these devices tick. And to be honest, neither have I; like so many tech-addicted individuals I’m totally reliant on my smartphone to get me through the day and love nothing more than sitting down for a game of Mario Kart 8 at the conclusion of a busy 24 hours.

But as for learning about all the magic that makes all of these things possible? Nah, mate. Too much effort. 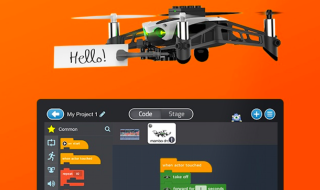 While I’m introducing my son to all this wonderful technology, I’ve been almost unforgivably lax when it comes to encouraging him to learn what could be an essential tool in his later life, especially as the world becomes ever-more reliant on coding, computers and smart technology.

That’s where Tynker comes in. Established in 2012, Tynker is focused on empowering kids by teaching them the basics of coding in a fun and engaging way, and hopefully fostering a new generation of coders. More than 60,000 schools use Tynker in the classroom, and the company’s cunningly gamified block-based coding system provides the ideal starting point for prospective software developers as young as seven, who can eventually move onto more complex programming languages and systems using the same core principles.

However, as I’ve found out myself, even the most bright and colorful website may not be enough to capture the attention of pre-teens who are used to digesting entertainment passively, which is why Tynker’s collaboration with drone maker Parrot is such a neat idea.

The two companies have joined forces to create a special bundle package which not only includes a six-month Tynker subscription – which gives access to 18 online coding courses, more than 350 puzzle games and over 100 coding tutorials – but also includes a Parrot Mambo minidrone which is used in conjunction with Tynker’s software to teach the basics of coding – the key difference here being that kids can actually see the effects of their handiwork in the drone’s actions. 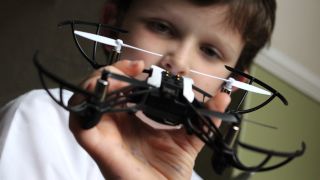 Kids love drones. It’s an almost universal truth and a huge part of what makes this particular collaboration so appealing. No sooner had I cracked open the packaging of the Mambo – which includes a grabber arm and (most exciting of all) a gun which shoots tiny orange pellets – had my son wrestling it from my grasp to inspect it more closely.

The Mambo is tiny and ideally used indoors; like many quadcopters of this size it has plastic guards which prevent the blades from hitting things like walls, furniture and delicate human child-flesh, so I was able to rest easy knowing that even though my son was about to use his almost non-existent coding skills to let this thing loose around our home, the damage should be minimal.

The building blocks of coding

Tynker’s coding language is based around stitching blocks together to create sequences of movements and actions, so while kids aren’t typing in lines and lines of text, they’re getting an understanding of how code works and fits together. Using this system they can swap actions, remove those which don’t work or add new sequences, all using the friendly, building-block-style interface. 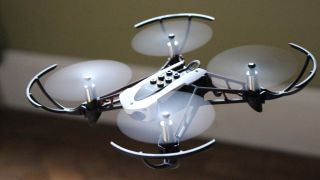 My son was initially a little frustrated that he couldn’t influence the actions of the drone directly and initially he repeatedly asked why he couldn’t just use the standard Parrot FreeFlight app to fly the unit in real time. However, he soon became fascinated by the fact that with the Tynker software he could make the drone perform tricks which would be tricky even for the most experienced quadcopter pilot; stringing together elegant loop-the-loops, dives and (room size permitting) dashes and spins became an addictive experience.

It was interesting to see him watch each sequence before going back to the drawing board to change elements he wasn’t happy with; it was at this point that the lightbulb above his head lit up (not literally, of course) and he began to see the true power of coding – the ability to automate technology and bring it under your control. He was able to grasp that there was no realistic way that he could get the drone to perform these tasks perfectly each and every time under manual control, but by using his own skills in Tynker he could create a sequence of actions which were executed identically several times over.

Needless to say, adding the grabber arm and shooter made the experience even more interesting, although I was fearful of the more delicate items in the room when the latter was in use. We set up a targeting range for him to let loose his pellet-blasting robot on (It’s clear that this is how Skynet’s Hunter-Killer units are conceptualised – we’re basically creating the generation that will inadvertently wipe us out one day) and much fun was had by all concerned. Apart from me perhaps, as I wasn’t relishing the idea of having to find all those bloody pellets after he’d gone to bed. 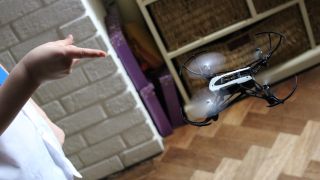 This $150 (roughly £115, or AU$190) bundle could well be one of the most valuable Christmas presents you ever buy for your child. While Tynker’s courses are available separately from the Mambo minidrone, combining the two definitely makes sense; I highly doubt I’d have been as successful in roping my unruly offspring into this exercise were it not for the intrinsic allure of flying a drone.

This aerial toy is the hook that pulls young minds in, with Tynker’s software turning programming into a game in very much the same way that Minecraft is creating a new generation of architects and builders (coincidentally, Tynker’s software can also integrated into Mojang’s famous video game). And who knows; once your child has had their first taste of Tynker in conjunction with the Mambo drone, they may be intrigued enough to keep using the software and – in the fullness of time – move onto more complex programming languages.

And if all it does is fuel their love of flight? Well, then there are plenty of amazing drones to choose from.